Honorary Consulate of the Principality of Monaco

This is where you’ll find information about our Honorary Consulate and our main purpose: to strengthen the close friendship that has existed between the Principality of Monaco and the state of North Rhine Westphalia for many years. We’ve listed several important and interesting addresses and links on this topic, and we'd also be pleased to receive your ideas and suggestions.

Honorary Consul of the Principality of
Monaco for North Rhine Westphalia

Bernhard Johannes Stempfle has been the head of finance and technology at Messe Düsseldorf GmbH since 2010, after working for the technology group Freudenberg SE and Deutsche Bank AG in a variety of positions.

He lived in France for several years and is therefore familiar with the culture and language of that region. Messe Düsseldorf GmbH can look back to a tradition of close friendship with the Principality of Monaco, especially through boot Düsseldorf, the world’s biggest watersports trade fair. 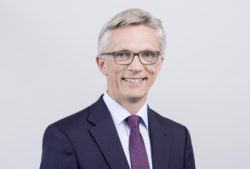 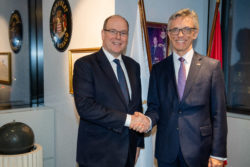 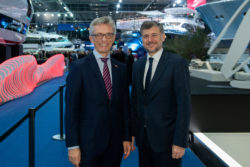 Bernhard Stempfle (left) with Frédéric Labarrère, Ambassador of the Principality of Monaco to the Federal Republic of Germany (Photo: Messe Düsseldorf/Hojabr Riahi)

Remembering the victims of the Holocaust 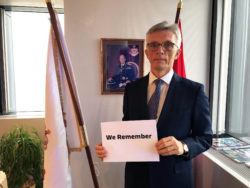 Düsseldorf, January 27, 2022. Exactly 77 years ago, the Allied troops arrived at the Auschwitz-Birkenau concentration camp. On the International Holocaust Remembrance Day, Bernhard Johannes Stempfle, Honorary Consul of the Principality of Monaco in NRW, is also making a statement against the forgetting and participates in the #WeRemember campaign of the World Jewish Congress. "Hatred and collective silence significantly paved the way to the Holocaust," says Stempfle. "During the Covid Crisis, we are seeing an increase in racism, far-right slogans and conspiracy theories. We must counter this to create a better future."

Donations handed over for flood victims in the Ahr valley 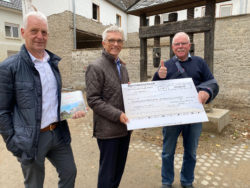 Dernau, October 14, 2021 – Bernhard J. Stempfle visited the municipality of Dernau exactly three months after the flood disaster in the Ahr valley. There he presented Mayor Alfred Sebastian with a symbolic donation check from the "Club Allemand International de Monaco" (CAI) in the amount of 10,000 euros, which will go towards the renovation of the village square.

"The damage is still considerable," Stempfle describes his impressions. According to the municipality, around 90 percent of the 1,800 inhabitants have been affected, and several people have died. "In the village itself, houses including beautiful half-timbered houses have been and are being demolished, especially when heating oil has leaked and contaminated the walls," Stempfle reports.

Beatrix Freifrau von Dellingshausen and Patrick Wetzel, co-presidents of the CAI, emphasize how important this commitment is to them and the entire association: "Charity is expressly one of our goals. As an organization that bridges the gap between Germany and Monaco, it is natural for us to help in this emergency situation."

Honorary Consulate of the Principality of Monaco

Outside the opening hours of the Consulate, please contact the Embassy in Berlin: